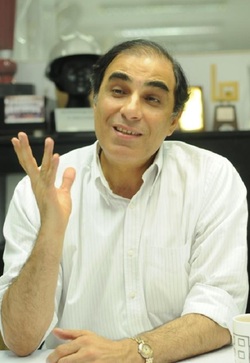 Hafeez Contractor is a famous Indian architect. His firm has over 350 employees including senior associates, architects, interior designers, draftsmen, civil engineering team and architectural support staff. The firm has conceptualized, designed and executed a wide range of architectural projects.
Hafeez Contractor commenced his career in 1968 with T. Khareghat as an apprentice architect. In 1977 he became the associate partner in the same firm. It was in 1982 that he began with his own private practice and from that moment onwards there has been no looking back. Between 1977 and 1980 Hafeez has been a visiting faculty at the Academy of Architechture, Mumbai. He is a member of the Bombay Heritage Committee and New Delhi Lutyens Bungalow Zone Review Committee.

He did his Graduate Diploma in architecture from Mumbai in 1975 and completed his graduation from Columbia University New York (USA) on a Tata Scholarship. His practice had modest beginnings in 1982 with a staff of two. Today the firm has over 350 employees including senior associates, architects, interior designers, draftsmen, civil engineering team and architectural support staff. The firm has conceptualized, designed and executed a wide range of architectural projects like bungalows; residential developments; hospitals; hotels; corporate offices; banking and financial institutions; commercial complexes; shopping malls; educational institutions; recreational and sports facilities; townships; airports; railway stations, urban planning and civic redevelopment projects.


Hafeez Contractor started working in 1968 as an apprentice with his uncle T. Khareghat even while working toward his architecture degree. In 1977, he became the associate partner in the firm. Between 1977 and 1980, he was a visiting faculty member at the Academy of Architecture, Mumbai.
He started his firm, Architect Hafeez Contractor, in 1983 with two people. One of his first success stories was the Vastu building at Worli Seaface. He then bagged projects in Pune for Karia Builders and a lot of residential buildings. He has also designed The Imperial I and II, the tallest buildings in India.
His projects are spread across India.
His work is controversial from the perspective of social impact and originality. His design approach is often thought of as uninspiring by architecture academics. Despite being one of India's most successful commercial architects, he publicly stated that "Green-buildings are a joke" and is known to exploit loopholes in the planning rules for disproportionate commercial gain of developers, while neglecting social or environmental degradation.