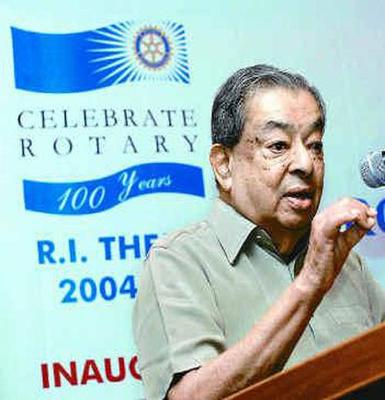 Verghese Kurien died on 9 September 2012 after a brief spell of illness in Nadiad, near Anand in Gujarat, India. He was 90. He is survived by his wife, one daughter Nirmala Kurien and a grandson, However, the iconic 'Amul girl' wept (first time ever since she been on billboards for decades) as her "father figure" will no more there with .
Born on 26 November 1921 at Calicut, Madras Presidency, British India (now Kozhikode, Kerala) into a Syrian Christian family, he would later turn an Atheist  His father was a civil surgeon in Cochin (Kochi, Kerala). He went on to marry Molly, the daughter of a friend of his

father.He graduated in Physics from Loyola College, Madras in 1940 and then obtained his Bachelors in mechanical engineering from the University of
Madras. After completing his degree, he joined the Tata Steel Technical Institute, Jamshedpur from where he graduated in 1946.
Later, as Kurien would say in his own words, "I was sent to the United States to study dairy engineering (on the only government scholarship
left) at Michigan State University. I cheated a bit though, and studied metallurgical and nuclear engineering, disciplines that I believed were
likely to be of far greater use to my soon-to-be Independent country and, quite frankly, to me."
He did however train for dairy technology later on, on a government sponsorship to New Zealand, a bastion of cooperative dairying then,
when he had to learn to set up the Amul dairy.
As the 'Amul dairy experiment' was replicated in Gujarat's districts in the neighbourhood of Anand , Kurien set all of them up under GCMMF in 1973 to sell the combined produce of the dairies under a single Amul brand. Today GCMMF sells Amul products not only in India but also overseas. He quit the post of GCMMF Chairman in 2006 following disagreement with the GCMMF management.

When the National Dairy Development Board expanded the scope of Operation Flood to cover the entire country in its Phase 2 program in 1979: Kurien founded the Institute of Rural Management Anand (IRMA).Kurien, played a key role in many other organizations, like chairing the Viksit Bharat Foundation, a body set up by the President of India. Kurien was mentioned by the Ashoka Foundation as one of the eminent present Day Social Entrepreneurs. Kurien's life story is chronicled in his memoir I Too Had a Dream. Interestingly Kurien, the person who revolutionized the availability of milk in India did not drink milk himself. Nevertheless, the work of Kurien & his team in India took India from a milk importer to a milk & milk-products exporting nation within the span of 2 decades.